Mandy Moore's Net Worth - Income From Her Music Career

Home Net Worth Mandy Moore's Net Worth - Income From Her Music Career. Mandy Moore has an estimated net worth of $10 million.

Amanda Leigh Moore or better known as Mandy Moore, is a famous American singer and actress. She is among few artists who have found similar success in both the acting and music industry. The famous artist first came into the spotlight with her debut single Candy and has continued to gain even more success in the recent years.

From her highly successful career in the industry, the famous multitalented artist has earned a vast fortune, and Mandy Moore's net worth is estimated at $14 million.

Mandy Moore Net Worth And Earnings

As mentioned above, This Is Us star, Mandy Moore's net worth is estimated to be $14 million. However, other sources claim that her net worth is $23 million. Whatever might be the correct amount, it is clear that Moore has amassed a massive fortune from her successful career.

How Much Does Mandy Moore Earn From Her Music Career?

Moore started her career in music in the late 1990s and released her debut single "Candy" in 1999. She gained immediate fame from the song, and her debut album So Real also had similar success. Soon after Moore began working on her second album, I Wanna Be With You and released it a year later. After this, she released four more records before taking a break from music. The talented singer has sold millions of copies of her albums and earned a considerable sum. The earnings from her albums according to The Richest are given below:

Apart from the album's sales, Moore also earned a significant amount of money from the tours she has been on in support of the albums. All of the sales and tour income has undoubtedly helped the talented singer earn millions. And with her releasing her new record, Silver Landings in March 2020, it is clear that music has helped propel Mandy Moore's net worth to new heights.

At the height of her music career, Mandy made her acting debut in 2001 in the comedy Dr. Dolittle 2. She voiced a Girl Bear Cub and has since lent her voice in numerous shows, video games, and films, including Tangled, TRON: Uprising, Brother Bear 2. She has also starred in many popular movies like The Princess Diaries, A Walk to Remember, Love, Wedding, Marriage, among others.

In addition to movies, the beautiful actress has also been a part of many television series like Grey's Anatomy, Red Band Society, Entourage, and many more. However, her portrayal of Rebecca Pearson in the hit NBC show This Is Us has made her a household name. 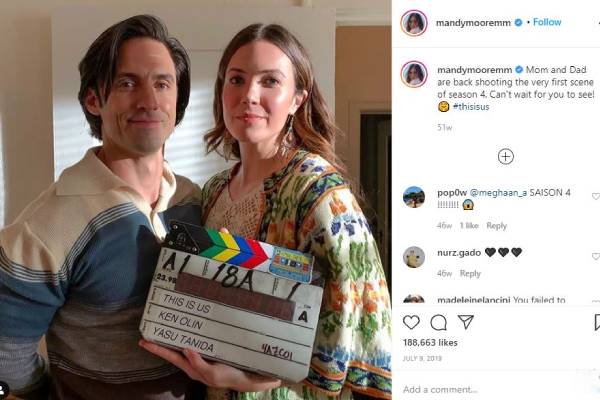 The series not only helped increase her fame but also helped her earn millions in a short amount. Along with her earnings from other acting projects, Moore's salary of $250K per episode from This Is Us has helped increase her net worth significantly.

Income As A Designer And From Brand Endorsements

In addition to acting and singing, the multitalented beauty also earned quite a lot from her fashion line Mblem. The brand sold contemporary knitwear and cashmere products and was focused on taller women like her. Mandy launched the clothing line in 2005; however, in 2009, she announced that the line was discontinued. The reason behind this drastic step is still unknown, but Moore must have earned a hefty sum from the product sales.

Since Mandy is one of the most well-known actresses in the current scene, many companies have been eager for the star to be the face of their brands. She became the brand ambassador for Garnier in 2019. This business deal must have helped increase her collective earnings.

With a massive fortune in her name, the singer and her husband Taylor Goldsmith is living a lavish lifestyle. The pair currently resides in a lovely home in Pasadena, Los Angeles. They bought a classic 1950s house for $2.6 million and then renovated it to their taste. Moore shared the interior designs of her beautiful home with Architectural Digest in 2018.

In addition to living in a beautiful mansion, Mandy has traveled to many countries around the world. Going through Mandy's Instagram, she has posted photographs of her trip to various places, including her trek to Everest Base Camp Nepal with her close ones. She is also a philanthropist and has worked with and supported numerous causes throughout her career.