Ethan Sandler is a well-known name in the movie industry as he has been a big part of numerous movies and television series. He has worked on various projects like Crossing Jordan, Meet the Robinsons, Man with a Plan, and New Girl as either an actor, producer, or writer. With him occupying various positions in these projects, we can say that Sandler is a multi-talented human being.

While the professional life and achievements of the actor-cum-producer, is well-known among the viewers, Ethan Sandler's biography and other personal detail is a different story. So, let's learn more about the multi-talented artist, including his net worth and marital life with fellow Hollywood star Kathryn Hahn.

American actor Ethan Sandler was born in Fort Wayne, Indiana, on December 3, 1972. His family then moved to Washington, and Sandler reportedly graduated from Mercer Island High School in 1991. The talented actor is very private and rarely shares information about his early life, but his wife, Kathryn Hahn, revealed that he is Jewish.

After graduating from high school, Ethan Sandler studied at Northwestern University and graduated in 1995. It is unclear what course he took while at the college but seeing his profession, Sandler might have attended classes for acting.

The American actor has chosen a career that puts him in the spotlight, but Ethan Sandler's family members, including his parents and possible siblings, are a complete mystery to the world. However, there have been rumors that Ethan is related to popular comedian Adam Sandler, some even stating that the two are brothers.

While we might not be able to share any information about Sandler's siblings, we can be sure that Adam and Ethan are not brothers. They are not related in any shape or form and only share the same surname. Maybe in the future, we will see the duo as on-screen brothers.

Ethan Sandler Net Worth And Career

As stated above, Ethan Sandler is the only one in his family who is a part of the entertainment business. The Northwestern graduate has been actively working in the film industry since the 1980s in various capacities and has found fame from his career. He has also amassed a fortune, and according to Celebrity Net Worth, Ethan Sandler's net worth is estimated to be around $3 million. As for his wife, Kathryn Hahn's net worth is $2 million.

Like many actors, Ethan Sandler had to struggle hard to make a name in the entertainment industry. He made his debut in 1988 as Caroni in the movie The Chocolate War but did not gain much recognition. Sandler then managed to secure small roles in television movies, and feature films like She'll Take Romance, Adventures in Spying, and Flushed.

Ethan Sandler has appeared in commercially successful movies like The Princess Diaries, The Bourne Supremacy, and Meet the Robinsons. He has also starred in films that did moderate business on the box-office, and given below are a few of the projects and their respective worldwide collection as stated in IMDb:

While he has starred in and earned a considerable sum from his big-screen career, Ethan Sandler mostly found fame from his television career. His first big role was in the crime drama Crossing Jordan. Ethan Sandler's wife, Kathryn Hahn, was also cast in the show in 2002. The husband-wife duo was on the show till 2007, after which Sandler went on to appear in series like New Girl, Transparent, Love, and most recently Single Parents.

The talented actor has yet to secure a major role in television series. However, he has appeared in several well-known shows and must have pocketed a considerable sum from it. Also, the salary he received from various movie roles has undoubtedly helped increase Ethan Sandler's net worth.

Income As Producer And Screenwriter

While he was still in the earlier phase of his acting career, Ethan Sandler tried his hand on the production side. He was a consulting producer in a few episodes of My Boys in 2007 and 2008. He was later promoted to producer in 2010 and also wrote a few episodes.

After the show ended in 2010, Sandler was again hired as consulting producer for the NBC show Whitney. He spent two years producing the tv-series and then co-executive produced an episode of We Are Men in 2013.

After gaining experiences from the aforementioned shows, Ethan Sandler joined the well-known sitcom New Girl production team. Between 2016 and 2017, Sandler was a co-executive producer in forty episodes. He then occupied the same position in thirty-eight episodes of another sitcom, Man with a Plan.

As per his IMDb page, Man with a Plan is the most recent show that the American actor worked on as a producer. While there seem to be no new projects for the actor, Ethan Sandler's net worth must have heavily benefitted from the payment he received as a consulting and co-executive producer on his previous shows.

As mentioned above, Ethan Sandler's parents and other family members are a mystery yet to be solved, but it is a known fact that the actor is married to fellow Hollywood star Kathryn Hahn. Sandler and his wife met while both were students at Northwestern University, and the pair started dating soon after. Since both of them were pursuing a career in acting, Sandler's relationship with Hahn grew even stronger during their days as struggling actors.

The talented actors got married on January 3, 2002, the same year they appeared on the show Crossing Jordan. The pair moved to Los Angeles in the early 2000s, and since then, Ethan Sandler's wife, Kathryn Hahn, has gained celebrity status while he is flourishing behind-the-scenes. However, there is no jealousy between the couple, and they have remained grounded even after gaining such success. 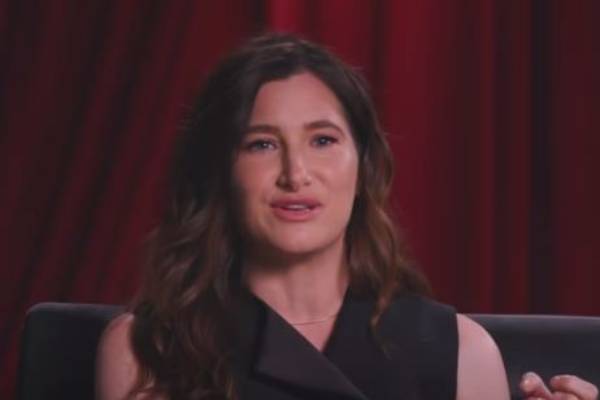 Additionally, in their decades-long marriage, the Sandler-Hahn pair have welcomed two children into their family. Kathryn gave birth to their first baby, a boy, Leonard Sandler, in 2006, while their daughter, Mae Sandler, was born in 2009. Both parents were ecstatic about the new addition to the family.

Unlike many celebrity kids, Ethan Sandler's children Leonard and Mae are rarely seen in the tabloids. While the little ones accompany their parents to some movie premiers, Sandler and his wife, Kathryn, have chosen to keep much of their children away from the spotlight. Even in the day and age of social media, it is commendable how protective Sandler and Hahn are of their kids.

As stated above, Ethan Sandler and his wife, Kathryn Hahn, were once struggling actors staying in New York. However, after years of hard work, both of them have tasted similar success and now enjoy a lavish lifestyle in Los Angeles.

In 2016, Ethan Sandler and his wife bought a house in the Los Feliz area of LA. According to Variety, the couple paid $2.55 million for the updated 1920s Mediterranean villa. This big purchase came only a few months after the pair sold their previous home for $1.6 million, a bit above the asking price of $1.4 million.

Looking at the amount Ethan and Kathryn have paid for the properties over the years, it is clear that the couple and their children live comfortably.