K.J. Malone is the son of the well-known American retired basketball player, Karl Malone. Karl made a name for himself in the NBA scene and was also an integral part of the national basketball team with whom he won two Olympic gold medals.

While his father found fame as a basketball player, K.J. Malone chose to play football and pursued a career in the sport. As the son of one of the most famous NBA players, many people are quite interested in K.J. Malone's life and career choices.

K.J. Malone was born Karl Anthony Malone Jr. on May 8, 1995, in Salt Lake City, Utah. While his father is a well-known NBA star, his mother, Kay Kinsey, is a former pageant winner. She won the title of Miss Idaho USA in 1988.

Malone was a student at the Cedar Creek High School and then attended Louisiana State University. He played as an offensive lineman for the LSU Tigers football. He graduated from the university in 2017 with a Bachelor's degree in Interdisciplinary Studies.

K.J. Malone is the only son of his parents, Karl Malone and Kay Malone, among four children. He has three sisters, two older, Kadee Malone and Kylee Malone, and one younger, Karlee Malone. K.J. shares a close relationship with his siblings, and all of them have supported each other through various endeavors.

In addition to his three sisters, Malone also has three half-siblings from his father's previous relationships. Twins Daryl Ford and Cheryl Ford, who were born in 1981, were the first children of former NBA stars. His third child is Demetress Bell, who was born in 1984. Karl did not have any relationship with Bell and the twins for much of their childhood.

K.J. Malone Net Worth And Career

After playing for the team at the LSU for years, K.J. Malone was signed by the Houston Texas as an undrafted free agent. He participated in Houston's rookie minicamp for a few days and then decided to retire from the game completely.

The decision to retire from football was due to the knee injury that Malone suffered during his college football career. Karl Malone's son revealed the decision on his Twitter and also revealed that he would further his career in law enforcement.

Whether or not K.J. pursued a career in law enforcement is unknown. However, he took up a job at his former university as a coach for the football team. He was one of the coaches of the team which won the 2020 College Football Playoff National Championship back in January. 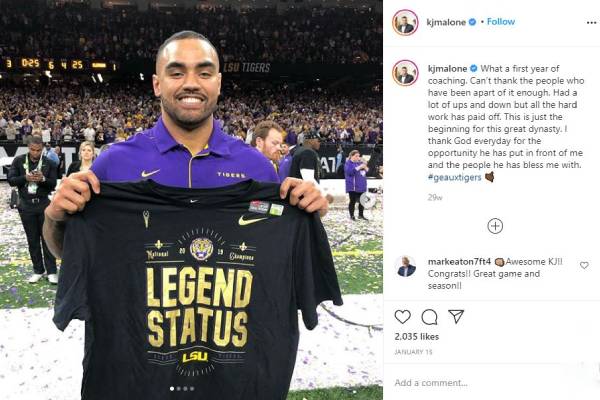 While he could not fulfill his dream of playing in the NFL, K.J. has utilized his skills and knowledge to coach young and emerging players in the LSU team. And K.J. Malone's net worth must have been highly impacted by his earnings from his coaching career. As for his father, Karl Malone's net worth is estimated to be $75 million, which he earned from his time as an NBA player and various business ventures.

Karl Malone's son K.J. Malone is currently in a relationship with Kaitlyn Walker. While there is not much detail about their relationship, it is believed that the two met at Lousiana State University. K.J. Malone's girlfriend, Walker was a track and field high jumper at the LSU and graduated from the university in 2019. 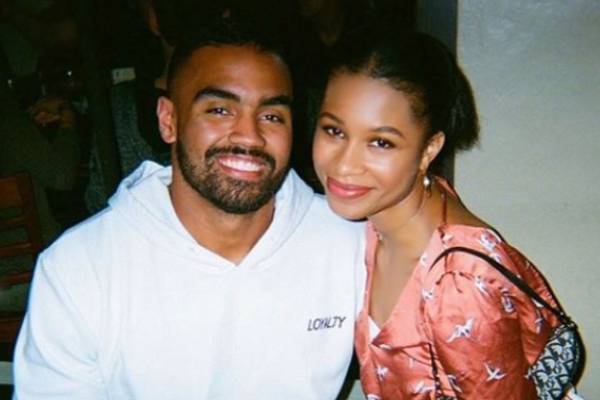 K.J. and Kaitlyn revealed their relationship only in January 2020. Both of them posted pictures of themselves on their respective Instagram after the LSU won the National Championship. Since then, the loved-up couple has continued to share numerous photos and dedications for each other.