Shaunie O'Neal's net worth if $35 million comprises of her earnings as a television personality and businesswoman. Image Source: Shaunie O'Neal Instagram.

Shaunie O'Neal is mostly famous for her relationship with the former NBA player Shaquille O'Neal. She has continued to stay in the limelight and has been a part of reality shows as a producer and cast.

From all the work she has done over the years, Shaquille's ex-wife has earned a massive fortune. From her highly successful business ventures, Shaunie O'Neal's net worth is estimated to be $35 million.

Shaunie O'Neal Net Worth And Earnings

Along with her role as a producer, Shaunie was also part of the cast of Basketball Wives since the first season. The series became an instant hit in 2010 and is still going strong. She also produced the show, Shaunie's Home Court, which followed the daily life of Shaunie and her kids with her ex-husband Shaquille O'Neal.

As the executive producer and a significant cast member of the two-hit reality show, the mom of five has surely pocketed a huge sum over the years. The earnings from these shows have definitely helped increase Shaunie O'Neal's net worth.

After gaining much attention from her marriage and reality show, Shaunie has invested in various businesses over the years. She started her own legal marijuana company in 2018. The reality television personality even revealed more about the company and the health benefit of the cannabis and the medicinal properties of it to her cast members. 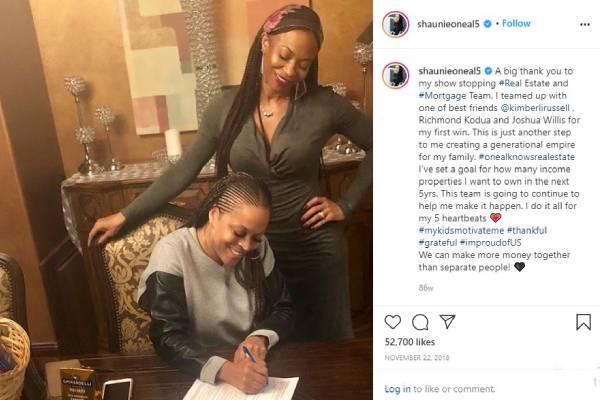 The business has been going strong, and O'Neal has gained much profit from it. In addition to the marijuana business, she has also invested in the real estate business. The earnings from these business ventures have undoubtedly helped raise Shaunie O'Neal's net worth to new heights.

While Shaunie has established herself as a successful businesswoman, she first came into the spotlight as the wife of Shaquille O'Neal. Their relationship and the subsequent divorce was the talk of the town. The former couple got married in 2002, and they officially divorced in 2011.

The former couple's divorce was highly publicized though many details about the divorce settlement were private. However, it was revealed that Shaquille pays $10,000 per month to his ex-wife and an additional $10,000 for each of his four children. Furthermore, according to The Richest, Shaunie's total alimony and child support for the year of 2018 was a grand sum of $5,040,000

After earning millions as a television personality and an entrepreneur, Shaunie O'Neal lives a lavish lifestyle. She resides with her five children in Los Angeles and is living her life to the fullest. She is an avid traveler and has shared numerous pictures of her vacations with family and friends on her social media pages. Furthermore, Shaunie O'Neal's house is so big that she can't decide to stay in which room amid the self-isolation.