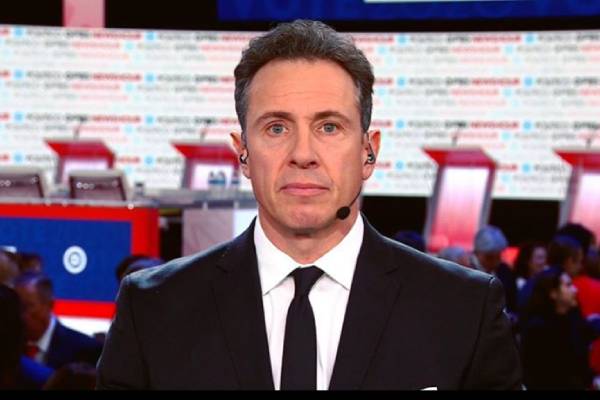 CNN anchor Chris Cuomo's wife, Cristina Cuomo was revealed to have been tested positive for COVID-19.

More than two weeks after CNN's anchor, Chris Cuomo was tested positive for the virus, Cuomo reveals that his wife, too, was found to be positive. The news was revealed by Cuomo in an online interview with his brother, New York governor Andrew Cuomo while Cuomo himself was quarantined in his basement.

The news was shared on April 15th, 2020 on Cuomo Prime Time. During the interview, Chris adds, "It is the one thing I was hoping wouldn't happen and now it has." The governor also shares his views on the issue stating that it is difficult for family members not to get infected when one has been tested positive. As such, everyone is advised to be careful and follow social distancing as has been told.

One of the symptoms that Cristina currently has is losing her sense of smell and taste. It was said that Chris does not have this symptom and that this symptom was observed in more mild cases. At the moment, Chris Cuomo's kids are well and the family, as well as everyone, hopes that they will stay safe.

Chris Cuomo himself was tested positive for COVID-19 on March 31st, 2020. He had previously been in contact with several people and was showing symptoms like fever, chills, and shortness of breath before having himself checked. Cuomo was quarantined in the basement of his house and continued to host his show at 9:00 p.m. ET from his home.

When the news was revealed several people expressed the views and told Cuomo to stay strong. With thousands of fans cheering for him, Chris did not let the virus get the best of him and continues to do his best while at home. 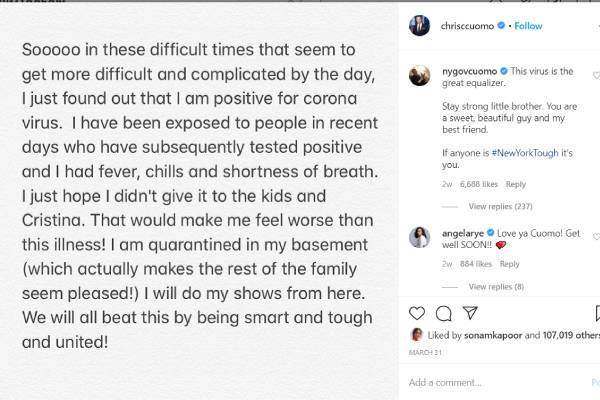 Chris Cuomo has been the anchor for Cuomo Prime Time for almost three years now after the first week-long broadcast ran in August of 2017. With the viewers count reaching hundreds of thousands up to a million, the show on CNN is one of the most viewed shows.

At the moment Chris Cuomo's children, Bella Cuomo, Carolina Regina Cuomo, and Mario Cuomo along with their parents are staying in their home, making sure to stay as safe as possible. At the moment Chris continues to share news on the show as well as on his Instagram and it may not be long before Chris finally recovers. Nonetheless, fans hope that news of Chris's recovery comes soon.